Warrant of arrest for Metsing 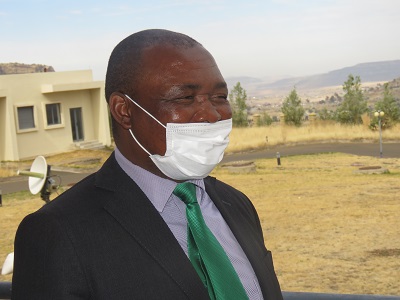 MASERU – The High Court issued a bench warrant in the facilitation of the arrest of the leader of the Lesotho Congress for Democracy (LCD) Hon. Mothetjoa Metsing yesterday.

This is after the lead counsel for the crown Advocate Shaun Abrahams asked the court to issue the warrant to have him arrested.

His lawyer, Advocate Motiea Teele King’s Counsel (KC) told the court that his client was fully aware of his scheduled appearance before the court but does not know the reasons for his absence.

Advocate Teele KC said he last spoke to Hon. Metsing on Sunday, a day before his court appearance.

“I duly pressed on them [Metsing and Mochoboroane] to appear today [Monday] on the order of the court,” he said.

Meanwhile, Hon. Mochoboroane the Minister of Development Planning and also the leader of Movement for Economic Change (MEC) appeared before the court joining the accused soldiers and had indictment read to him.

He joined the four accused soldiers as accused number six.

Hons. Mothetjoa Metsing and Selibe Mochoboroane had earlier petitioned the court to review the Director of Public Prosecutions’ (DPP) decision to join them in the ongoing criminal cases involving the former Lesotho Defence Force (LDF) Lieutenant General Tlali Kamoli and other soldiers.

The duo had also challenged the DPP’s decision not to “resort to committal by a Magistrate”.

They lost the case and the court upheld the DPP’s decision to have them joined in the ongoing trial.

“The reasons for challenging the decision of the Director [of Public Prosecutions] do not pass the legal muster. The decision to join the applicants for summary trial in CRI/T/0001/18 stands. The applicants must appear in court on 6th December 2021 so that they can be arraigned,” reads the judgement in pertinent part.

Also, previous endeavours to challenge their joinder were unsuccessful.

Last year, they petitioned the Constitutional Court Division of the High Court over their prosecution arguing that they are exempted by the controversial “Clause 10”.

The Constitutional Court declined to grant them rescission and also declared the controversial Clause 10, ruling that it is “unconstitutional”.

Clause 10 makes provision that: “Mr [Mothetjoa] Metsing and similarly placed persons will not be subjected to any pending criminal proceedings during the dialogue and reform process.”

The Constitutional Court held that:

“… it would be legally justifiable to arrive at a conclusion that Clause 10 of the MOU [memorandum of understanding], remains unconstitutional. However, we remain convinced that the spirit in the MOU appears to be a constructive way forward paving towards national healing, reconciliation and unity.

We reiterate our earlier position that the problem is intrinsically political and needs a political solution rather than a legalistic one.”

They had previously accused the DPP of what they termed the “abuse of court process”.

“The abuse of court process committed by the DPP is manifested in a related but different context in these proceedings. She agreed to refrain from exercising her powers to institute the proceedings against the applicants pending the outcome of the decision by Constitutional Court on clause 10, which dictated the deferral of prosecution against them,” reads their court application.

The Court of Appeal dismissed their case where they wanted it to rescind the judgement on the unconstitutionality of Clause 10.

In dismissing their application during its April sitting earlier this year, the higher court of record said: “The Lesotho courts already are under severe pressure due to congested court rolls. There is a need to stem [the] unwarranted proliferation of litigation involving the same parties based on the same issues and related to the same subject matter.”