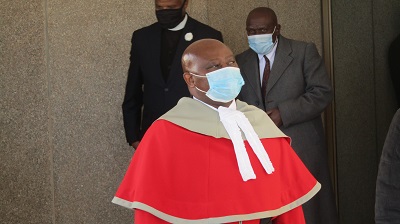 This he said during the ongoing treason case involving Hons Mothetjoa Metsing and Selibe Mochoboroane and the former Lesotho Defence Force (LDF) Lieutenant General Tlali Kamoli and other accused soldiers.

Chief Justice had asked the prosecution and the defence team if they would have the trial separate whereas the former wanted a single trial, citing the relevant judgement to this trial.

This is because some of the accused are not charged in other counts.

The Crown Advocate Shaun Abrahams submitted that about 70 per cent of the witnesses will testify in all counts, adding that it will be in the interest of justice if there is a single trial.

Advocate Abrahams argued that consolidation of these charges will be in the “interest of justice and on the balance of convenience for the witnesses”.

To some witnesses, he said if there is a separate trial, they will be forced to testify many times.

“To do otherwise will cause inconveniences to the witnesses that had to be recalled. I can’t have witnesses testify many times,” he argued.

For the defence, Advocate Motiea Teele King’s Counsel (KC) said the crown had not furnished him with the statements of 24 witnesses.

He said there should be a separation of charges but warned it should be deferred until his clients are supplied with those statements.

The defence counsel said he would ask for the separation of trials when they have received the remaining witnesses’ statements.

By having a single trial, the crown will be prejudicing their clients, Advocate Teele KC has said.

CJ took to the prosecutions saying it is “wrong to start a trial when all preliminaries are not satisfied”.

“You don’t cherry-pick the statements,” he said.

He further asked the prosecution why they failed to tell him before the court gets underway.

“We just have to adjourn. Counsel [Advocate Abrahams] you haven’t done your homework,” he said.

The Head of the Judiciary further accused the crown of “tardiness” which he said has resulted in delays.

CJ also ordered that all motions be submitted before the start of the trial.

He has taken over the case from the Southern Africa Development Community (SADC) Judge Onkemetse Tshosa who has resigned in all “high profile” cases he was engaged to hear.

The court had directed Metsing and Mochoboroane to appear before it and to join the other accused.

“The reasons for challenging the decision of the Director [of Public Prosecutions] do not pass the legal muster. The decision to join the applicants for summary trial in CRI/T/0001/18 stands. The applicants must appear in court on 6th December 2021 so that they can be arraigned,” reads the judgement.

Although he was in the box, he was not asked to plead pending investigation processes by the crown, thereby forcing the court to postpone the matter.

Meanwhile, a warrant of arrest has been issued for Hon. Metsing for failing to appear before the court without an explanation.

Metsing and Mochoboroane had lodged many litigations challenging their joinder and that the courts review the Director of Public Prosecutions (DPP) to have them joined in the ongoing trials ranging from treason to murder of the Sub-Inspector Mokheseng Ramahloko.

The crown is represented by Advocate Shaun Abrahams and Advocate Naki Nku.

The case has been scheduled for December 13.