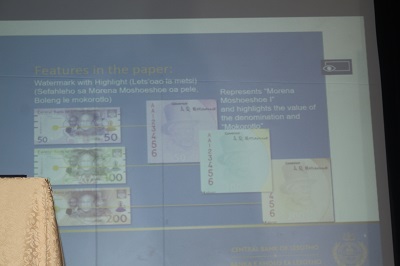 The enhanced banknotes became a legal tender effective from December 23.

Speaking at the event, CBL Governor Dr Retšelisitsoe Matlanyane said the Bank has upgraded security features in the enhanced series of banknotes.

The upgraded family of banknotes are identical to the current ones and comes in smaller size and improved security features which will enable visually impaired persons to easily identify their value.

“These Maloti banknotes have been especially made for the Lesotho public with highly visible security features that are easy to identify by visual inspection and the feeling of touch to protect users against counterfeit.

“The SICPAPROTECT vanish consisting of both anti-bacteria and antiviral properties have been introduced to make banknotes safer for handling. The security thread that cuts across the portrait of the King is relocated to the left side on all denominations to improve the design of banknotes,” she said.

Dr Matlanyane further underscored the two “most significant” changes that have been introduced:

“Secondly, the Bank removed the silver stripe- a plastic window on the surface of existing M200 notes – these banknotes subject to rapid wear and tear that reduced the expected lifespan of the banknotes.”

Further taking stock of the improvements in the new currency, she noted: “This is a manifestation of the Bank’s efforts to help the visually impaired to also identify banknotes with the aid of a special design feature using sense of touch.

She continued: “This is the first major change of currency design in over twenty years in Lesotho.”

The Governor explained that the change in currency was inspired by the need to comply with international best as well as the need to exploit innovations within the banknotes industry. This move, she said, is aimed at supporting integrity of the current banknotes and address counterfeit.

The Governor said the active banknotes will remain in circulation until they are phased out through wear and tear.

One of the CBL’s function is to issue, manage and redeem currency.