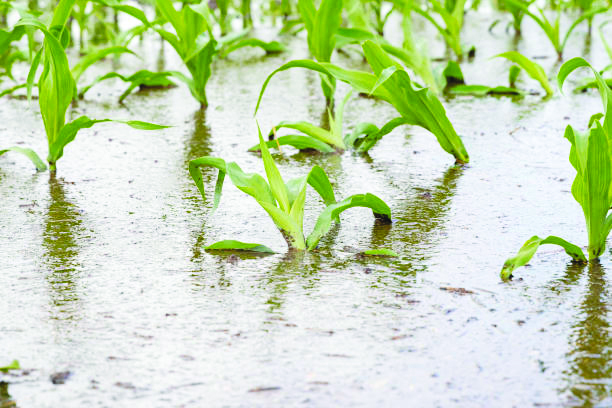 Due to persistent heavy summer rains, farmers are worried that crop production will be lower this year, which is likely to affect income, decrease the amount of food available for consumption, and also negatively affect the economy of a country.

Semonkong Potatoes Association Farmer ‘Maikaneng Pakela, conveyed her worry saying due to excessive rains she fears that harvest will be poorer than usual because crops are submerged in water, which is going to result in potentially devastating losses that will impact their business negatively.

The Semonkong Potatoes Association is an organisation of farmers that produce potatoes on a larger scale, they are influenced by the potential potatoes has to contribute towards the alleviation of food insecurity in the country.

Pakela mentioned that in farming there is an “ideal” amount of rainfall in any given growing season for most crops. However, she said this year average rainfall is much higher than the ideal rain fall and she predicted that it will lead to significant problems such as drowned crops that will ultimately lead to lower yields.

She said one of the many reasons why she anticipates for a little harvest was that fields turn into water logs, thus delaying ploughing and other crops maintenance activities. As a commercial potatoes farmer, Pakela said since it rains almost every day, they are therefore unable to remove weeds in fields because the soil texture is muddy.

Pakela said due to the negative impact of the rain, unfamiliar pests have been attacking their crop yields causing damage to the potatoes. She indicated that another challenge that affects their productivity was the lack of tractors.

“Normally we plough with cattle. But given the unstable weather, it takes too long because they are slow,” said Pakela

In an interview with Informative Newspaper, Department of Agricultural Research Chief Research Officer Rathabile Nchee, said when rainy conditions continually persists such as currently, such conditions results in commercial farmers not meeting the production targets because crops become ruined. Also, there is an increase of various unwanted insects because of the moisture in the soil. On top of that, farmers are unable to use chemicals due to such wet conditions in the fields.

Nchee mentioned that in food production, it is very important to remove weeds because they compete with the crops for resources like water, nutrients, sunshine and space. Weeds can sometime not be easy to spot and as such can interfere with harvest. She explained that is these weeds are not removed they can carry crop pathogens or become hosts for grievously crop-damaging insects, and most importantly rob the crop of its yield potential.

“A lot of damage is happening in food production. Since it rains a lot, tractors are unable to enter field because it is muddy. Also, it is very unfortunate for people that plant maize because, unlike other foods, maize has cut-off date but unfortunately they can’t plough in the rain,” said Nchee.

To adapt to unstable weather conditions, Nchee advised farmers to use improved seeds that grow faster as compared to traditional seeds that takes a longer time to grow.