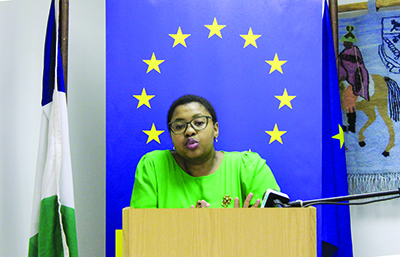 When it comes to protecting the rights of children, the design of Lesotho‘s Judicial system unfortunately is suspect-oriented as opposed to victim based.

Concerned Janki said when a police officer witnesses a crime or has a reasonable suspicion that a crime was committed in any village, police attend to the suspect immediately on the crime scene while victims are neglected.

“If the suspect was battered by the villagers, the Police will make it their point for the perpetrator, to get to health facilities and even make sure that he or she is not detained for not over 48 hours. Suspects will also be informed of their rights in the arrest procedure. These are often known as Miranda rights. They state that anything a suspect says could possibly be used against them and that he has the right to legal representation,” said Janki.

However, it is a different story for some victims of Gender Based Violence (GBV), especially children because the law centres more on the accused as opposed to the victim.

The magistrate opined that this impartiality is triggered by the faults in the justice system, saying no one is responsible for caring for the victims.

Janki said not even when the crimes occur in semi-facility or in the family sphere, whereby the abuser is the father or is the husband to the accused.

Nevertheless, developments partners together with the Government of Lesotho developed the Lapeng Care Centre, which is a safe space where women, boys, and girls who have experienced GBV can access free counselling services, referrals to other services, or temporary shelter. It is run by professional counsellors and nurses. Here, the victims receive rehabilitation services to help them to reintegrate, however, due to lack of resources, they are only allowed to stay for three weeks.

Janki said that women sometimes are sent back home before their disputes are resolved, just because the shelter is unable to provide for their needs.

On a lighter note, the Citizens Voices Addressing Violence Against Children (CVAVAC) vowed to build a One-Stop Child Justice Centre to protect children’s human rights. The centre will be backing the Children s court since it is only one in the entire country.

CVAVAC Project Coordinator Sello Mahloane said the Child-friendly facility will be designed to portray integrated and holistic approach towards children when resolving issues of minors.

Mahloane said, one children‘s court does not accommodate all children that are in conflict with the law, so the One-stop Child Justice Centre will help collect data of GBV victims in one place without victimising.

“In Lesotho for a child to report a crime they undergo a lot of traumatic procedures before getting justice, cases get tracked for months thus discouraging victims but with the help of One-Stop Child Justice Centre, the reporting of a crime will be less traumatic for a child, and quick,“ Mahloane assured.

The project is utilizing Citizen Voice and Action (CVA) as an advocacy approach. CVA is the citizen-state social accountability advocacy methodology that transforms the dialogue between communities and governments in order to improve services like health care and education, which impact the daily lives of children and their families.