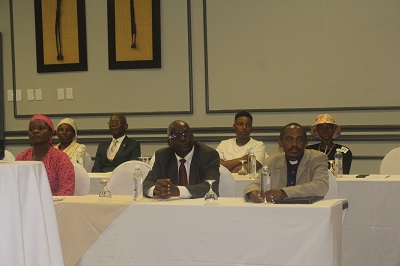 The People’s Matrix Association has raised concerns on churches and constitutional laws that portray Lesbian, Gay, Bisexual, Trans, Intersex and Queer (LGBTIQ+) people as living an immoral and sinful life.

This transpired during the high-level meeting in commemoration of Human Rights Day on Tuesday last week.

The People’s Matrix is an organization which is dedicated to advancing human rights in Lesotho, particularly the rights of the LGBTIQ+ community.

The meeting sought to find the stance of both lawmakers and church leaders in terms of the legalization of the rainbow nation lifestyle and inclusion of the LGBTIQ+ community in the national and churches’ constitutions.

Despite the global recognition and accommodation this lifestyle, the church leaders and the lawmakers in Lesotho seem to oppress and continue to do so by “playing cat and mouse within the LGBTIQ+ space, hiding behind one another and trying to hide their homophobia or discrimination.

Of the biggest highlights was the issue of churches serving to protect their own institutions even if that means depriving other people of their rights of freedom.

Again, some of the discriminatory acts by the churches and law institutions are “judging the LGBTIQ+ Community with scriptures from the bible which they often misinterpret and thus some members of the community dropping out of churches, and denying same-sex marriages to be blessed in churches.

“So the question remains, what is the purpose of the church if churches do not practice what they preach which is to love and accept one another regardless of their state of affairs? Does the law really have best interests in all of its society?” asked The People’s Metrix Project Coordinator Dee Malelu.

Malelu suggested that church members go back and introspect, and teach other church members what they want from churches as queer people, who also believe in evangelizing the word of God but have a hard time doing so because some have been banned from attending certain churches because of their sexuality.

“Higher hierarchy of power in churches ought to be part of such meetings because they have a lot of influence on society and the Office of Parliamentary Council stated that the LGBTIQ+ community is free to radicalize the constitutional laws that seem to be prohibiting them to live their lives freely. Just like other unique individuals who have challenged the laws and succeeded, the LGBTIQ+ people are free to question laws that are bereaving them of their rights,” Malelu said.

Some members of the different churches who preferred to stay anonymous agreed to walk a mile in the shoes of the LGBTIQ+ community, to reflect and stop justifying their homophobia with scriptures from the Bible.

“So in the future we expect to see more and more queer members going to different churches without fear of being discriminated, constitutional laws that seem to be denying the LGBTIQ+ community their rights commutated, hopefully this will include legalizing same-sex marriages and removing same-sex intercourse from criminal acts.