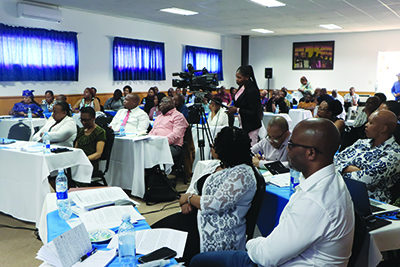 BEREA – Chief Justice (CJ) Sakoane Sakoane has told the judicial officers to appreciate their line of demarcation in the discharge of their duties.

This he said during the colloquium of the Judges and the Magistrates last week.

CJ urged them to assert their authority and always respect the lines of hierarchical reporting. He highlighted that there is a conflation between judicial work and judicial administrators by some of the heads of the courts, this, he said causes a lot of “things to fall through the cracks” and result in conflicts.

He appealed to the heads of the courts, that there is an administration and the judicial side of the courts, saying the latter is the most critical component responsible for how courts should run. The CJ warns the heads to desist from “micro-managing” the staff, saying it should be clear who reports to who and in what frequency.

He told the participants to take action accordingly when the need arises for those reporting directly to supervision, but warned that they should not overreach themselves to avoid repercussions that may follow on account of their conduct.

The head of the judiciary also bemoaned the quality and the organization of the judgments some Magistrates have penned down, saying this has been evident during the applications for judgeship positions when they are requested to choose their best five judgments. He appealed to them to produce better judgments that will be uploaded on the judiciary’s website.

“I have seen capable colleagues faltering when it comes to judgments, and what confidence would you have if you are leading the judiciary in a colleague whose judgment leaves a lot to be desired? We are not perfect all of us, but we endeavor to learn every day when we read the judgments from other jurisdictions.

“I should haste to add that I see a lot of talent in the Magistrates and I believe this talent has to be nurtured. Magistrates have to be empowered, they have to be reskilled so that they can actually be proud of their work,” he said.

Taking stock of the delay in the administration of justice, the CJ said the judicial officers share the work as cases change hands of the police and the prosecutors until they are heard in the court.

One of the participants, Qacha’s Nek’s Senior Resident Magistrate Tšeliso Bale underscored the importance of administration, saying as LLB holders, they do not have an administration background, a move that proves cumbersome to run the Magistrates.

Bale said they are “clueless” on issues of administration intimating that they sometimes risk being found wanting with laws and regulations.

He stressed that the judicial officers ought to be capacitated to appreciate their job descriptions.

He commended the colloquium as a step in the right direction.

A meeting of this nature was last held in 10 years.

The Judiciary is independent of other organs of the state, being the Executive and the Legislature.

“The interface aims to strengthen the justice delivery mechanism in compliance with international standards, while simultaneously taking advantage of opportunities presented by the current ongoing national reforms while preserving the judicial core values, taking into consideration the various trends and issues affecting the Judiciary’s ability to perform its mission effectively.

“Successful interface and deliberations at the colloquium shall translate to enhancing an independent Judiciary in providing fair and impartial justice within the jurisdiction conferred by the Constitution and Parliament of Lesotho,” said Judiciary in a statement.

These engagements were supported by the United Nations Development Programme (UNDP) and the European Union (EU).