Not all is lost for teenage mother 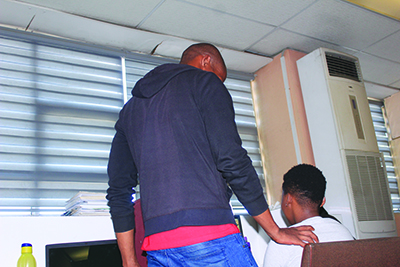 MAFETENG – Ha-Ramathalea is firmly nestled atop the Thabana-Morena plateau on the rural outskirts of the Mafeteng district. This is the abode of Nteboheleng (real name withheld for fear of repercussions), the girl whose dream of becoming a nurse has been deferred.

Like any other girl, Nteboheleng had dreamed of a beautiful wedding and family after completing her studies in the tertiary institution, but alas, that did not materialize.

After writing her Standard 7 examinations at the age of 16 in 2020, she eloped with a man five years her senior who lives in the same village as hers, the move that would halt her dream of becoming a nurse.

The now 18 years tells this reporter that things could have been different if her father was still alive and had her mother closely monitoring her as she is working in South Africa (SA) and comes on a few occasions during the year. It is feared that emotionally absent mothers do not adequately prepare their children to be boys and girls for adolescence stages and the resultant effect is girls falling victim to early child marriage as Nteboheleng.

She says her husband, who also did not proceed to high school, is working in SA and fears for his life as she says it is risky for him owing to a lack of proper working documents.

Moved with emotions, she said she had wanted a brighter future for her son, now deceased, whom she had at 17 to experience a better life than she did.

This reporter could also pick in the conversation that she has no clue that child marriage is an illegal and punishable offense.

According to the Lesotho Violence Against Children and Youth Survey (VACS), 2018, at least 11 percent of girls were either married or cohabiting before attaining the age of 18. The study however focused on Berea and Maseru.

Child marriage is still a prevalent problem in Lesotho. Although, there are efforts to address it, much more still needs to be done to arrest it, especially in rural areas.

The United Nations Children’s Fund (UNICEF)’s recommended age of marriage is 18. It recognizes marriage before 18 as “a fundamental violation of human rights”.

It goes on to say: “Child marriage often compromises a girl’s development by resulting in early pregnancy and social isolation, interrupting her schooling, limiting her opportunities for career and vocational advancement and placing her at risk of domestic violence.”

On boys, it argues that: “… marriage may similarly place boys in an adult role for which they are unprepared, and may place economic pressures on them and curtail their opportunities for further education or career development”.

Her paternal grandmother, tells us that elopement is widespread in their area.

When asked if there was any intervention in her granddaughter’s “marriage” before attaining the legal age of 18 she answered in the negative.

“Both families really did not have a clue. When a child is married, the boy’s family enquires about the age, and on our part, we also did not intervene to return her home,” she said.

Evodia further tells this reporter that this case was not reported to either the police or the then Ministry of Social Development which is the custodian of children’s welfare.

However, all is not lost for Nteboheleng as she is undergoing a hairdresser training in Mafeteng. She also wants to pursue her studies through correspondence until she completes high school.

It is an old practice and according to the studies, mostly girls who are victims of child marriage drop out of school and not all of them complete their high school education, thereby contributing to a decline in the literacy rate.

According to the studies, some of the causes of child marriage include poverty, mothers who force their daughters to get married in order to receive cows as dowry payment, as well as the peer pressure and in some instances, girls whose parents had left them home while they went to urban areas or even South Africa in search of economic opportunities.

From the Ministry of Gender, Youth, Sports, Arts, Culture and Social Development, the department of Social Development Public Relations Officer (PRO) Mpho Makhetha said they encourage the victims of child marriage to go back to school.

She said her department accords victims with psychosocial support, rehabilitate the victim and sometimes even the families but warned that the cases may differ.

Asked how much efforts are invested in raising awareness and holding campaigns warning the public of the dangers associate with early marriage, she said although they operate on a shoe string budget, they work in concert with the Civil Society Organizations (CSOs) and development partner to raise the alarm in this issue.

Makhetha said as part of their intervention and rehabilitation efforts, they among others pay school fees for victims and follow up on their progress.

In 2016, the Southern African Development Community- Parliamentary Forum (SADC-PF) adopted a model law on Eradicating Child Marriage and Protecting Children Already in Marriage and this model law was to be mainstreamed within the Member States. According to the model law, child marriage is “a statutory or customary union in which one party is a child or both parties are children”.

Similarly, a model law defines the child as someone below the age of 18 as the African Charter on the Rights and Welfare of the Child.

This Charter that Lesotho has ratified, says: “… a child occupies a unique and privileged position in the African society and that for the full and harmonious development of his personality, the child should grow up in a family environment in an atmosphere of happiness, love and understanding”.

It further reads: “… that the child, due to the needs of his physical and mental development, requires particular care with regard to health, physical, mental, moral and social development, and requires legal protection in conditions of freedom, dignity and security”.

On education the African Charter on the Rights and Welfare of the Child obliges the signatories such as Lesotho to “take measures regular attendance at schools and [address] the reduction of the drop-out rates [as well as taking] special measures to in respect of female, gifted and disadvantaged children, to ensure equal access to education for all sections of the community”.

“State Parties to the present Charter shall take all appropriate measures to ensure that a child who becomes pregnant before completing their education shall have an opportunity to continue with their education on the basis of their individual ability.”

In 2016, UNICEF in concert with the United Nations Population Fund (UNFPA) launched the ‘Global Programme to End Child Marriage’. The programme is targeted at protecting children against child marriage and advocates for an end to this practice.

According to these United Nations (UN) agencies, “the girls at greatest risk of child marriage are often those hardest to reach. They come from poor families, marginalized groups, or rural areas. They are also more likely to be out of school than their unmarried peers, robbed of the opportunity to thrive and fulfill their potential”.

In its endeavor to buttress the practice, this programme has for instance trained 480 child journalists in Bangladesh to report on child marriage, gender equality, and girls’ empowerment through videos that were uploaded on children’s online platforms.

In Niger, the programme sponsored social media and radio campaigns for increased mobilization that reach around 6 million audiences and some of the themes explored include child marriage and girls’ rights.

Also, in Uganda, the programme supported over 1 300 ‘male champions’ who were able to facilitate dialogue sessions that attracted over 10 000 men and boys in their communities on topics such as sexual and reproductive health, gender-based violence, child marriage and changing behaviors and power dynamics at home and in the community.

Lesotho can borrow a leaf from these intervention programmes to end child marriage. The importance of knowledge and education cannot be overemphasized, and it is of critical importance that the government together with stakeholders amplify efforts to create awareness of the dangers associated with child marriage.

If efforts to curb this anomaly are not applied, the country risks having among others low literacy rate as mostly those who drop out of schools are not well absorbed into the mainstream economy.

It is also important that members of the public should not shy away from reporting cases of child marriage to law enforcement agencies.

With the recent appointment of Queen ‘Masenate Mohato Seeiso by UNICEF as the National Champion of child rights,  Lesotho further stands a better chance to overcome this problem. Her Majesty has been vocal and advocating for the end of child marriage for years, and with her bestowed this title, her voice and influence could be handy for Lesotho’s efforts.