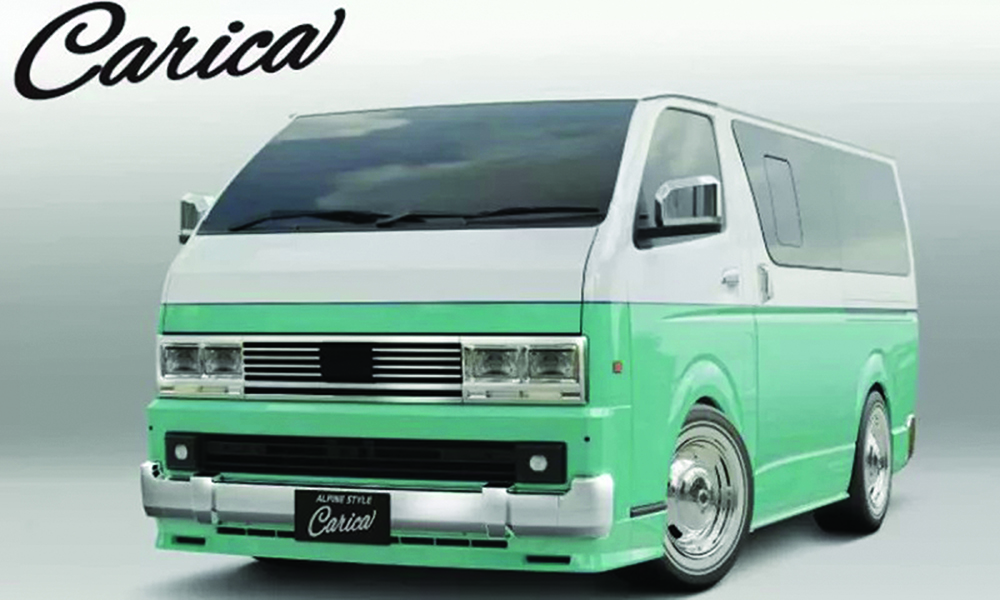 Released at the Tokyo Auto Salon, Japanese-based Alpine Style has taken what we know as the Toyota Hiace and imparted its touch of retro styling to the popular South African taxi with their newly dubbed Carica.

This isn’t the first time Alpine Style has dabbled with the iconic silhouette prominent on our roads however their latest endeavour; titled the Carica, draws its inspiration from American motor car styling prominent of the 80s. “California Dreaming Car” is the ideology of what the Carica name is derived from which is partially why all marketing material included boasts a sunset-themed surfers dream aesthetic to it.

In addition to the Hiace Carica, Alpine Style has also created a model bearing the name Havana, which originally started life out as a Toyota Raize, which in itself is a rebadged A200 series Daihatsu Rocky subcompact crossover SUV. Both models have been given a fairly conclusive exterior overhaul but the Hiace in question features two levels of trim; a US Style which has a two-tone paint job with teal on the lower extremities and white above. All bits of exterior garnishing has been finished in chrome; this includes the grille, bumper, and mirror caps, rear trim and unusual-looking rims.

In addition, a Euro model follows the same procedure however the front and rear bumpers have been finished in brushed metal while black accents compliment the rest of the rectangular model.

It’s not only cosmetic updates that Alpine Style has imparted onto the Carica. It boasts a raft of interior technological upgrades, which makes sense since the company is centred around electronic upgrades too. Chief amongst these are an 11-inch infotainment while a 12-inch digital rearview mirror sits in easy sight of the driver. Behind the front row of seats is a larger 12,8-inch display while the standard stereo has been discarded in favour of a full illumination setup. Adventure-focused buyers can also note that the rest of the cavernous minibus includes a bed while there is also an expandable tent for camping.

The Havana includes similar upgrades, with both models being shown at the Tokyo Auto Salon.

Not only reserved as show cars, the Japanese aftermarket company is taking orders for both with the Carica Hiace and Havana with the former costing 4,98 million yen, or approximately R650 000 for the conversion.