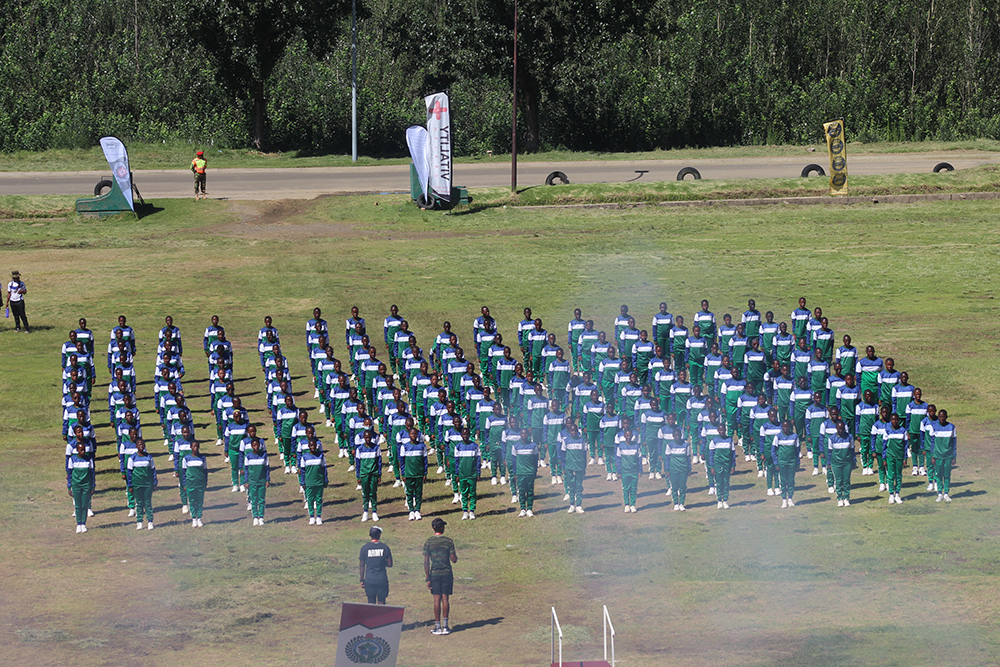 MASERU – Scores of Basotho had on Friday shared in the joys of celebrations during the pass-out ceremony of 457 youth who underwent a three-week training organised by the Lesotho Defence Force (LDF).

Dubbed, LDF Youth Development and Rehabilitation programme, serial three of 2022 was the third instalment of the youth boot camp. The first was in 2021.

Some could not contain their excitement over this LDF-led initiative wishing that it become a national youth service as is the case in countries like Kenya.

Major ‘Mamofokeng Mashili, the team leader for the LDF Youth Development and Rehabilitation was borne in 2021 following an outcry of community councillors, chiefs and members of the public to reign in on delinquent behaviour of what became known as ‘manomoro’, an organised crime group formed of ex-convicts and people initiated into gangsterism through certain tattoo markings.

She said the programme was mounted to arrest delinquent behaviour in communities where the gangs were committing crimes within the communities.

Major Mashili said they inculcate leadership qualities, patience, and patriotism among other traits through this youth development programme. The physical activities that they are required to do, she said prepare them psychologically and thus are disciplined.

Highlighting one of the successes of the programme, the LDF Youth Development programme team leader said some of the trainees have stopped using drugs. Although some are in the withdrawal phase and experiencing cravings, she urged the parents and guardians to support them.

Speaking at the graduation parade in Makoanyane barracks, the commander of the LDF Lieutenant General Mojalefa Letsoela said they have used the pillars that guide the LDF on the national contribution to national development activities by facilitating this youth leadership programme.

He said the LDF Youth development programme falls under one of the social roles of the army in nation-building initiatives.

The Commander said they aim to bring up the national breed of leaders who have a sense of humanity in their minds for the future and their endeavours.

The LDF Chief of Staff urged the government to come up with a comprehensive national policy for equipping with leadership skills the youth to become good citizens.

Lieutenant General Letsoela expressed dismay over what he called an “erosion of our norms and social values”.

Major Mashili also thanked the parents and the business community for helping them.

One of the trainees, Boitumelo Mokheche expressed gratitude to their parents for enrolling them on the boot camp as well as the LDF for “preparing them for the future”.

She further praised the LDF for this training for inculcating patriotism in them.

Mojele Mahloane said they were taught to be respectful to their parents.

On behalf of the trainees’ parents, Retšelisitsoe Theko implored the government to turn the boot camp into a national youth service.

“It is befitting that every Mosotho child undergoes this treatment so that we have better citizens,” he said.

He praised the army for drilling their children to appreciate the history of their country and instil patriotism.

For his part, the Minister in Prime Minister’s Office, Hon Limpho Tau said the country is facing challenges with its youth adding that the boot camp is a commendable initiative.

He said security has “no boundaries, security has no limit” adding that programmes such as youth boot camps become more necessary.

The Minister said it is the government’s wish to roll out this programme in all districts. Hon Tau said it is every parent’s responsibility to ensure the seamless growth of a Mosotho child.

Those who distinguished themselves in the training were awarded medals for recognition of their excellence.

The first cohort of the LDF Youth Development programme saw 200 and the second attracted 250.