Towards reaching no poverty 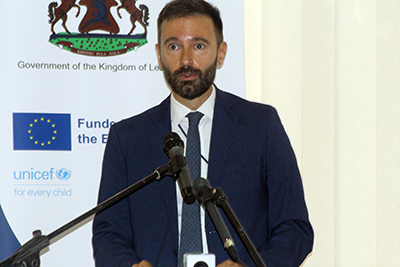 MASERU – The European Union (EU) Delegation to Lesotho Head of Cooperation Mario Giuseppe Varrenti expressed his worry about the vulnerability of children in Lesotho.

He thus noted that in an effort to alleviate the situation, EU developed a system that targets the most vulnerable children in Lesotho to aid with social protection. This system is called National Information System for Social Assistance (NISSA).

Going into details, Mario explained that NISSA organized a mini census that was rolled out throughout the country, starting from the rural areas to the urban areas. “NISSA provides a categorization of households depending on socio-economic status and that tool is used to divert resources to the most vulnerable households,” he said.

“Nine percent of resources under the core social assistance budgets go to the child programme that is specifically focused on vulnerable households with children as opposed to 80% going to the old age pension.

“Households with children under 18 years will receive the Child Grant to reduce child malnutrition, improve child health, and increase school enrolment and completion. Priority should be given to ultra-poor households. As poverty is higher in households with more children and with a higher dependency ratio, the benefit amount needs to be paid out per child, replacing the current phased benefit structure,” he informed.

Due to this increase in benefit amount, which already triples the budget, the Child Grant may only be able to cover ultra-poor households during the five-year strategy period, unless a complementary budget is freed up. The Child Grant needs to go hand in hand with Social and Behavioural Change Communication (SBCC) to educate recipients on the importance of spending the grant on costs related to the child’s nutrition, health and schooling.

Established by the United Nations in 2015, Sustainable Development Goal one (SDG1) calls for the end of poverty in all forms.

The National Social Protection Strategy II (NSPS II) 2021-2031 Action Plan states that Lesotho remains one of the most unequal countries in the world to date. Almost half of the population of Lesotho is poor (49.7 percent) and almost one quarter (24.1 percent) is extremely poor, living below the food poverty line.

“Unemployment, especially among rural youth, is high, and almost a quarter of the population has HIV/AIDS. Lesotho is highly vulnerable to shocks, such as droughts, food price increases and the recent COVID-19 pandemic. The ability of households to cope with shocks varies by their level of poverty and the vulnerabilities that they face,” reads the 2021-2031 Action Plan in pertinent part.