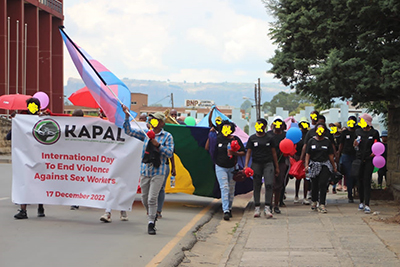 MASERU – The People’s Matrix Association together with Key Affected Populations Alliance of Lesotho (KAPAL) celebrated the International Day to End Violence Against Sex Workers and Annual PRIDE in a joint event on Friday.

The United States Ambassador and Deputy Ambassador graced this event.

As explained by Matrix Project Coordinator Jesial Ratalane, PRIDE is an event meant to celebrate Lesbian, Gay, Bisexual, Transgender, Queer, Intersex and Plus (LGBTQI+) social and self-acceptance, achievements and legal rights, and the importance for the nation to know about this community.

He said originally, it is conceived as a memorial and vigil for the victims of the Green River Killer in Seattle Washington, United States (US) and it has evolved into an annual international event.

He highlighted that sex work is the exchange of sex for money, goods and services by a sex worker either as a part-time career or full-time career. That a sex worker must be someone who is 18 years and above, she/he/they must not be forced by drugs, alcohol, human trafficking, sex slavery or any form of threat.

Mosooane introduced KAPAL as a legally registered organization in Lesotho that was registered in 2017.  He said the organization’s mission is to build a sustainable movement that fights for decriminalization of sex work while also advocating for the rights of other key populations through advocacy, capacity building and empowerment. The project is funded by Urgent Action Fund Africa (UAFA).

One of the sex workers listed the challenges they come across which entail: clients refusing to use condoms and experiencing violence from clients who sometimes rape them and force them into unprotected sex.

US Ambassador to Lesotho Her Excellency Maria Brewer stressed that LGBTQI rights are human rights and everyone deserves to live in peace, free and without being discriminated.

She urged everyone to know their HIV status and follow treatment, saying the US government stands with key populations and against trafficking in persons and Gender-Based violence (GBV) as no one deserves to be treated badly because of the way they identify.