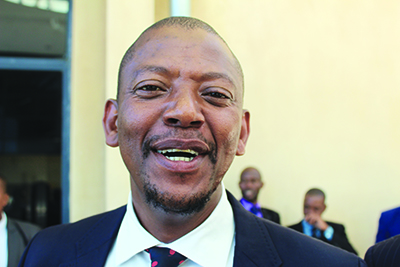 MASERU – Following his loss for the Senate presidency, the Principal Chief of Bela-Bela Mapoteng and Kueneng, Peete Lesaoana Peete has been sworn in as a member of the Senate.

The Principal Chief of Matšekheng was effectively reinstated as a member of the Upper House, as he had vacated that seat designating a someone.

During the Senate special sitting, Principal Chief Peete designated Chief Matsobane Peete for his seat in the house, while he contested for the position of the presidency which he lost to Hon. ‘Mamonaheng Mokitimi.

Then, the Principal Chief of Bela-Bela, Mapoteng and Koeneng, told this publication that he will think of his next move after failing to become a presiding officer. Hon. Mokitimi who is the second time President won the race beating both Chief Peete and Hlomohang Morokole.

Also a Lawyer by profession, Chief Peete was first sworn in as a member of the Senate in 2008 taking over from her mother, Chieftainess ‘Mantoetsi Lasaoana Peete.

He had served and chaired many portfolio committees such as the Legislation Committee.

In the 10th parliament, he was appointed a member of the Southern Africa Development Community (SADC) Parliament Forum (PF).

It would also be recalled that the Principal Chief of Matsieng, Prince Seeiso Bereng Seeiso also vacated his seat in the Senate and took up an assignment as the High Commissioner of Lesotho in the United Kingdom between 2005 and 2011. In his absence, his uncle, Chief Masupha Seeiso held the fort as Matsieng’s principal chief, the position he assumed until Prince Seeiso’s end of tour in the foreign mission.