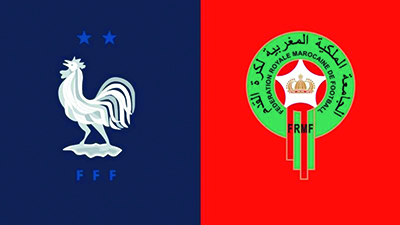 Argentina and Morocco’s fans have been the loudest at this World Cup but can they help their sides win their semi-finals against Croatia and France?

“I would like to see Argentina and Morocco get through, because of both teams’ amazing support,” BBC Sport football expert Chris Sutton said.

“Argentina fans drag their team through matches – it was a like a home game for them against the Netherlands in the last eight, and it will be the same against Croatia.

“With Morocco, I also think how it would be a great story for an African team to make it. Too often at this tournament, we disregard teams from outside Europe and South America, but Morocco have made people think differently.

“They would be my romantic choice to make the final, but I am less sure about their chances against France.”

Sutton is predicting the outcome of every game in Qatar.

He picked the winner in two of the four quarter-finals – getting the exact score in Morocco’s win over Portugal and France’s victory against England – and five of the eight last-16 ties.

That was enough to maintain his 55% success rate in the tournament, after he chose the right outcome in 26 of the 48 group games.

Before the World Cup started, Sutton chose 12 of the 16 teams that progressed to the first knockout stage, including France, his pick to win the tournament, and England, who he correctly said would go as far as the last eight.

I put my hands up here because I have written off Croatia numerous times throughout this tournament – and I don’t mind saying I’ve got them badly wrong.

They are brilliantly organised and, at 37, Luka Modric is still so influential. They can keep the ball to control games and are extremely resilient.

True, they lack a cutting edge at times but they found a goal when it mattered against Brazil in their quarter-final and also appear happy to go the distance.

If this tie goes to penalties too, then no-one will fancy facing goalkeeper Dominik Livakovic from the spot after his heroics in the past two rounds.

So, this is going to be an extremely difficult game for Argentina, but I think it will help that they won’t under-estimate Croatia on Tuesday, and will know what to expect.

Argentina are without both full-backs, Gonzalo Montiel and Marcos Acuna, through suspension after their yellow cards in what turned out to be a pretty crazy game with the Netherlands last time out.

When Lionel Messi put Argentina 2-0 up, it looked like they were through, but the Dutch responded with some brutally direct football to level and probably would have won it if they had continued playing that way in extra-time.

Who knows how this game will play out and I would say it is 50-50 in terms of who will win. But I haven’t done too badly following my heart rather than my head at this tournament, so I am going to do it again and send Messi through to the final.

I always say Diego Maradona is the best footballer ever and he won the World Cup in 1986. Messi’s amazing career could be labelled incomplete by some people unless he does the same but now he is two games away from achieving it – and I’d love to see it happen.

His pass for Argentina’s first goal against the Dutch was phenomenal and shows he can still dictate little moments in games, even if he cannot do it for the entire 90 minutes like he used to.

They will need more of the same from him here and they also need to keep their heads, because they seem to play on the edge most of the time. Do that and they will get through.

Yes, this means I am writing off Croatia yet again – which probably means another shootout, which they will win.

Morocco’s plan, to defend deep and spring out on the break, seems simple but it is not easy to execute it as well as they have done against some very accomplished teams.

The only goal they have conceded in five games in Qatar is an own goal against Canada in the group stage. They have also faced Croatia, Belgium, Spain and Portugal at this World Cup and none of them have found a way through.

My worry is that injuries and fatigue will catch up with them here. Romain Saiss was carried off against Portugal, while there have been doubts over the fitness of fellow defender Nayef Aguerd and key midfielder Sofyan Amrabat.

Morocco break with great pace and purpose when they counter-attack and I am sure they will get opportunities the same way in this game.

I don’t see it working to such full effect this time, though, because they might be too stretched to hold out,

The best way to describe France is they find a way and that is what I am expecting to happen here too, with Olivier Giroud having another big say in the outcome.

France don’t play dazzling football but they are good to watch because they have got so many eye-catching players, and they seem to perform in fits and starts rather than sustain a high level for long periods.

That was how they got through their quarter-final – they were just more ruthless than England when they got their chances.

It is that quality in attack that should make the difference in this game as well. I am backing France to score first and see it through.

Morocco will score, and they will rely on adrenaline as much as their quality, but I fear this will be a game too far for them.

I would love to be wrong, just because the African side have arguably been the best story of this World Cup, but this is probably where they say goodbye.