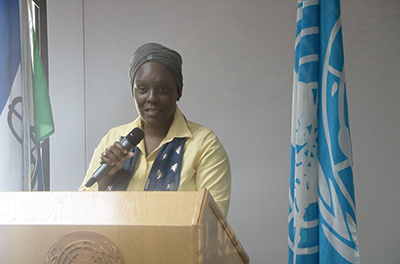 … the story that inspired me

As part of the celebration during International Volunteers Day on Tuesday, 6th December, at the United Nations (UN) house, the United Nations Resident Coordinator to Lesotho Ms. Amanda Khozi Mukwashi told an intriguing story on volunteerism.

She boasted about her impressive CV (Curriculum Vitae) as she went to the United Kingdom (UK) to apply for a job that she could not secure only with her multiple qualifications. “But I was told that all those qualifications do not mean a single thing if I had no experience working in the UK, and obviously one would try to crack their head trying to think of multiple jobs that would give them experience, but that is not the case as I was advised to volunteer somewhere to gain experience in the end,” she narrated.

So if she had those qualifications then she could offer her expertise to companies just so that she can improve her CV, she would stand a better chance.  That is exactly what she did which in the end improved her CV drastically and gave her the opportunity she was seeking.

As she mentioned, one can work as a janitor, give out tea in a company and clean offices, and obviously one would wonder how someone of their caliber can do such a thing. The simple answer she gave is; “because it counts as work experience”.

Ms. Mukwashi also mentioned that volunteering comes in many ways and not just necessarily going out and doing work. She shared that she currently makes sure that she tutors at least four girls a year free of charge, specifically young black African girls because she had experience and she does not want them to go through the route alone.

She herself used to volunteer at an elderly home apparently, where she would serve the elderly and they made snarky comments such as; “This is how it’s supposed to be, black African girls serving us”. But even after all that, she would still serve them with a smile on her face, and so she tutors the girls so that they prepare for the journey ahead.

The lessons which could be learned from this are: firstly, how to help out to people in need, those in desperation or in extreme poverty. Ms. Mukwashi shared another story of a family of three children where the eldest girl, not even above 13 years, got raped and conceived. “She also had a little brother who was probably in grade 3 at the time and they needed a means of living, it was really touching to learn that people around had volunteered to help build them a house of two rooms so that the children can have a warm comfortable place to rest at night,” she said.

Another lesson that can be learned is that volunteering can help open doors in places of higher learning or even give opportunities for getting proper career paths as aforementioned by Mukwashi. If two people were to apply for a job and the first one had exceptionally good grades but happens to have only been idling and the second one does not have the same grades but has some work experience from having volunteered somewhere, the second one has a better shot at being accepted just because they have an obviously bigger drive and work ethic in comparison to the one idling and doing nothing.

And lastly, a lesson that can be learned from a moral viewpoint is that volunteering can boost a person’s mental state and well-being because as a volunteer, one does not gain anything personally, but they help a person in need to gain, and knowing that their actions played a part in aiding at least one person have a better life in return amplifies one’s morality.

In all of these, knowledge can be attained as she ended her speech with an incredible message saying, “Volunteering is a thread that joins the social fabric together”.