Lesotho vows to soldier on in fight against GBV 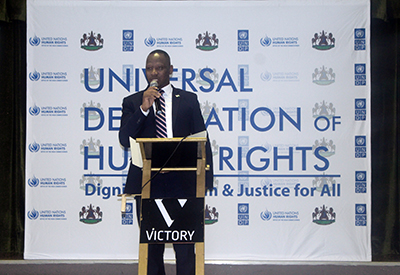 MASERU -The Minister of Foreign Affairs and International Relations Hon. Lejone Mpotjoane said a lot of efforts will be applied in addressing the scourge of Gender Based Violence (GBV).

This he said last week during the commemoration of International Human Rights Day, speaking on behalf of the Deputy Prime Minister, who is also the Minister of Law and Justice, Justice Nthomeng Majara.

The end of the 16 Days of Activism against GBV coincides with the International Human Rights Day which is commemorated on December 10.

This year it runs under the theme “Dignity, Freedom, and Justice for All”.

During the Human Rights Day, countries take stock to reflect on their efforts in preservation and promotion of the human rights as well as the setbacks.

Also known as the International Bill of Human Rights, the UDHR was adopted in 1948, on December 10, three years after the establishment of the United Nations.

“Gender-Based Violence (GBV) is on the increase and remains one of the main challenges facing women in Lesotho. It has been addressed by holding capacity building training sessions for Police officers in the Child and Gender Protection Unit, Judges, Magistrates, Prosecutors, Chiefs, Traditional and Religious Leaders on gender issues, human rights and how to manage GBV cases. Government will continue to undertake efforts to address the root causes of this crime,” he said.

According to the Commonwealth report published in 2020, Lesotho’s economy loses close to eye-watering US$ 113 million approximately M1.9 billion to GBV.

United Nations (UN) report on the other hand reveals that one in three women experience GBV during their lifetime while more than five women or girls are killed every hour by a family member.

Hon Mpotjoane continued: “To add on to these already existing challenges, the past years have been particularly difficult for all of us due to the Covid-19 pandemic which has been fueled by deepening poverty, rising inequalities, structural and entrenched discrimination and many other gaps in human rights protection. Drastic measures had to be taken to contain the spread of the pandemic, thereby impacting on some fundamental human rights for many individuals and families.

“Despite these exogenous setbacks, there continues to be progress on most fronts albeit at a slower pace.  The promotion, protection and advancement of human rights will continue to remain at the core of Government’s agenda.”

On behalf of the Minister, Principal Secretary (PS) for Ministry of Gender, Youth, Sports, Arts, Culture and Social Development Dr ‘Mamoeketsi Ntho said they tried to take stock of what has been achieved and take note of the setbacks that hinder Basotho to fully enjoy their rights.

“On this 75th anniversary of the Universal Declaration of Human Rights, my Ministry commits itself to ensuring that the rights of the most vulnerable including women, girls, children and persons with disability are promoted. We count on all stakeholders to join the Ministry of justice in ensuring that the dream of the drafters of the Universal Declaration becomes a reality for the people of Lesotho.

“To the Members of Parliament present, you have a significant responsibility for promoting, protecting and realizing human rights through parliamentary functions of law-making, oversight, and representation. You are strategically positioned to ensure that government officials (duty bearers) are not committing human rights violations and that national laws are in line with human rights standards,” Dr Ntho said.

She said there has been a commitment to strengthen institutions whose role protect the human rights.

Dr Ntho said they rely on all stakeholders to engage in the promotion and protection of human rights.

The UN says “violence against women and girls remains a pervasive human rights violation around the world”.

The UN aspires for the end of violence against women by 2030.

Present at the celebration were the members of both houses of the parliament, Attorney General Advocate Rapelang Motsieloa, Director of Public Prosecutions (DPP) Advocate Hlalefang Motinyane and CSOs.