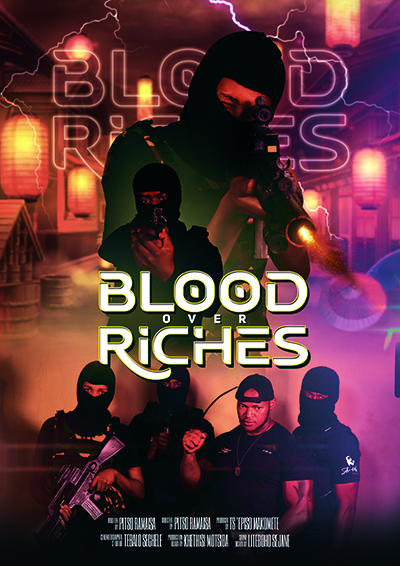 The Limkokwing University of Creative Technology (LUCT) Film and Television final year students will release a distinctive science fiction (sci-fi) action movie “Blood Over Riches” on the 20th this month.

In an interview with Arts&Lifestyle Blood Over Riches Cinematographer and Editor Tebalo Sechele said the movie portrays the extreme lengths that some people may go to protect their families and loved ones. He added that everyone on the cast went an extra mile to make sure that the movie was successful and worth watching.

Sechele said this is a must-watch movie because it will be the first of its kind locally produced. “It contains traditional Sesotho attires like “Seanamarena” and “Famo” music as well,” he revealed.

He mentioned that they included Basotho traditional attires to show the origin of the film in international markets and to sell their creativity in the movie industry.

“We are trying to prove to our fellow citizens and the world at large that the film industry is alive and we can make good movies as long as they all believe and support us,” said Sechele.

The primary target audience of the film are people from the age of 25-35 years old.

Diving deeper into the details of the movie, the Cinematographer said the movie is in the future, showcasing how life will be in the next 50 years or so, while using advanced technology like Hologram Watches and Screens rather than normal computer.

Giving the readers a glimpse into Blood Over Riches, Sechele said the strong character Nthatisi (25) will work in a good-paying Security Company which is supposed to be a once-off job but she gets caught up. “She plays “mommy” and “daddy” to her sister, Senate because their mom died. One good day she takes a job that she thought was the last but along the way things get pretty ugly. She and the troop of security members gets ambushed at the extraction point by the gang members but Nthatisi as the main character manages to survive,” he narrates.

Sechele explained that in the movie Nthatisi manages to escape barely because she is badly injured so she runs to the nearest safe house.

“Limo (40), the name of her worst nightmare, and now the nightmare, is coming for her at its worst. While fighting for her life at the extraction, some men died and one of the dead, men is Limo’s younger brother and he’s determined to revenge but not come in through safe house’s front door.

“Limo, international most wanted mastermind, kidnaped Senate – Nthatisi’s sister who was with her friend Felleng (15) at the moment and hacked into the safe houses’ feed. On live camera feet he told Nthatisi where to deliver the coin if ever she still wants to see her younger sister alive and then slaughters Senate’s friend just to prove his point that he will kill Senate if she doesn’t do what he says,” Sechele advised readers to watch the movie once it has been released to get the rest of the story.

He noted that the production of the movie was challenging due to limited financials because the film has only night scenes, they had to shoot at night, which demanded a lot of money for transportation of the cast.

The cast includes most of Sotho Kids Culture Agency models and other actors who won their roles from auditions.