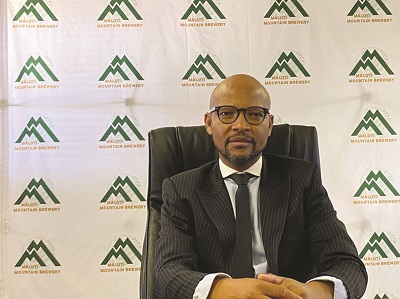 As his tour of duty comes to an end, our reporter Thoboloko Ntšonyane caught up with Maluti Mountain Brewery (MMB) outgoing Chief Executive Officer (CEO) Sesupo Wagamang. He reflects on his journey while at the helm of MMB. Below are the excerpts of the interview.

How has your journey been at MMB?

My Journey at MMB has been incredible, we had lots of challenges as well as plenty of opportunities to create shareholder value. I am grateful to have been given the opportunity to lead this great organization with rich history.

What have been some of the challenges and highlights you experienced during your leadership at MMB?

If you remember well, when I took over the organization it was going through a transition period after SABMiller was bought by ABINBEV. This presented one of the biggest challenges for me as there was a lot of uncertainty driving by cultural differences between the organizations. This led to a number of Senior Managers opting for mutual separation packages, which meant building a new team from the scratch with limited manufacturing experience. This also turned out to be the biggest opportunity for us, as the team grew stronger together and went on to deliver some of the most amazing results, delivering double digit growth on Gross Turnover as well as EBITDA.

The other biggest challenge was the unpredictable nature of the coalition governments. I arrived in 2017 when a new Coalition Government had just been voted in. As you are aware, a new coalition was subsequently sworn in 2020. The uncertainty in policy direction, was a challenge, and it made it difficult to make key investment decisions. As you may know, business thrives when there is clear policy and the uncertainty around the regulatory environment hindered MMB’s ability to grow at a faster rate and create the much-needed jobs for Basotho. During my 4 years in Lesotho, I worked with two Ministers of Finance and four Ministers of Trade. And each time we had to start our briefing sessions from scratch, sometimes, at times when we had made progress with the previous incumbent.

How was leading the Brewery during the COVID-19 era especially during the hard lockdowns?

It was quite a difficult and frustrating period for the alcohol industry, especially at the beginning of the pandemic where the industry felt governments made decisions without constructively engaging them. This resulted in massive losses across the value chain, where some retail outlets closed down and people lost jobs. We understood that governments had the responsibility of protecting the citizens life’s but there was no scientific evidence that supported the narrative of alcohol spreading the virus hence we advocated for the sale of alcohol on take away basis just like you could go to a supermarket to buy bread observing Covid-19 protocols, as opposed to blanket ban that was  arbitrary applied every time there was a spike in new cases. Despite this challenging working environment, we remained committed to working with Lesotho government as we preserved jobs for our 250 workforce by applying a workforce retention plan and this did not only preserve jobs of our own employees it also included our suppliers and our entire value chain.  We also became part of the solution where we supported our retailers, the Police and own employees with sanitizers and masks as well as partnering with NACOSEC to educate people on vaccine and other Covid-19 related protocols.

What is the most important lesson the liquor industry can draw from the COVID-19 pandemic?

While the overall goal has been to protect citizens’ health, the restriction in the supply of alcohol products has also stimulated illicit markets to meet unsatisfied demand, with negative knock-on effects, including fiscal consequences and health and safety risks. Prohibition as a form of controlling sale of alcohol does not work and it is essential to continue building awareness among policy makers of the intersection of alcohol regulation, illicit trade and public welfare. Policy makers should keep in mind the complexity of interconnected policies and the potentially damaging consequences of their actions. It will also be important to explore new enforcement strategies to ensure that illicit trade activities caused by the pandemic do not become permanent features of the post-pandemic economy. Also, it is important as governments move from crisis management to recovery planning, to understand that there are valuable lessons from experiences with demand restrictions that can help shape constructive and inclusive ways to build back economic activity, employment and safer communities. In-depth dialogue with private stakeholders must continue, as public-private partnerships seem to be a promising and effective tool for modern governance.

You previously expressed reservation with the passing of Tobacco and Alcoholic Products Bill, 2020. When it does, what do you foresee as a long-term repercussions of its passage?

The tobacco and alcohol bill has not yet been passed, as the Economic Cluster Portfolio Committee, recalled the Bill from Parliament. Having said that, our only hope is that the Hon. Members of Parliament will do the right thing and vote against the Bill which will most probably have the same repercussions as restricting demand during the pandemic. My view is the introduction of the levy will lead to undesirable outcomes which will impact the overall economy of Lesotho as proven by numerous case studies within the Southern African region.  As a matter of fact, the trend now is that all Southern African countries which implemented additional levies and excise tax, are reversing them downwards due to unforeseen consequences.

-What is your word of advice to your successor?

Be part of the solution and get Lesotho vaccinated so we can return to some sort of normality.