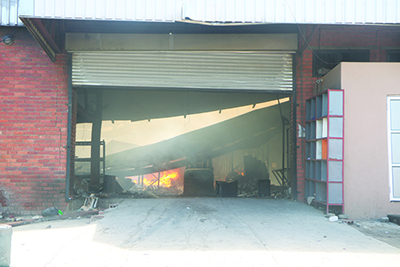 MASERU – It was a somber mood last week as there was no longer sounds of barcode scanners at the paying tills, sights of forklift and customers who flocked to DK Wholesale and Supermarket to buy their goods.

The controversial DK Khubetsoana Wholesale serving the community in Khubetsoana and neighboring villages was gutted in a devastating fire that reportedly broke out on Monday night.

The usually vibrant and active shop had turned into a scene to behold as people peeped through the gates and the management and staff was restless due to the fire damages.

According to the preliminary reports, the fire has been attributed to electrical faults.

There has been no casualties reported.

This publication went to the scene on Tuesday morning, and saw the millions worth of goods burning in ashes, heaped in a rubble of the part of the building that had collapsed due to heavy fires. The only equipment that was spared were the gas cylinders as they were outside the building.

Attempts to solicit the reaction from the store owner, identified as Cheng proved futile as he declined the interview saying he was “stressed”.

Meanwhile, the shop staff who spoke to this publication showed fears for their future as more than 30 jobs are at stake. The staff was also not at liberty to give the interviews for fear of repercussions saying they were not authorized.

One of them, whom this paper has his names, said they have been badly affected as they were expecting the end of year salaries.

He said life is going to be tougher on them when outside of the employment.

The distressed employee with three years at the shop said they will have to start from the fresh.

Joining the shop as the packer to now a driver, he said as members of the staff, they do not know what future holds for them.

The member of the Lesotho Mounted Police Service (LMPS) fire brigade Police Constable (PC) Motsamai Malibo said they arrived at the scene on Monday night at around 8pm to battle the fires, but access to the premises was a challenge.

He said they had to break the corrugated iron sheets that had fenced the premises and broke the steel fencing for access. Had it not been for this trouble, he said they could have managed to control the fire before it does more damage.

On arrival on the spot, he said they were three teams made up of the LMPS, Lesotho Defence Force (LDF) and the National University of Lesotho (NUL) fire fighters.

He said the three teams battled the fires from the night when it broke until wee hours of the following day at around 3am.

He said the way the shop was packed, enabled the fires to spread quickly as there was no enough distance between shelves and the upper space.

PC Malibo said their challenge was not having a backup car, adding that it is time consuming to leave the fire scene to go for refill whereas the fires keep spreading.

The LMPS fire fighter urged the shop owners to get the basic extinguisher training in order to douse fires before the responding firefighters arrive on the spot.

Meanwhile, PC Malibo said they are yet to conduct their investigations on what caused the fires.

This is a second shop that burnt down in a spate of a month, as Pick’n Pay Hypermarket went up in flames last month.