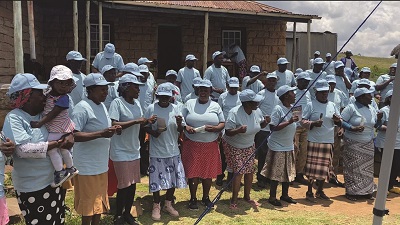 In an effort to light up underserved and developing rural areas, the Lesotho Renewable Energy and Energy Access Project (LREEAP) will electrifying Ha Nkau and provide a power station that will supply its surrounding communities with solar power.

LREEAP is the government’s initiative that is aimed at increasing access to electricity to urban and peri-urban areas of Lesotho through grid extension to industrial zone and households. The project will also promote private sector participation in the provision of electricity to underserved rural communities through mini-grids.

LREEAP Coordinator ‘Mathapelo Keke Silase mentioned that through this project, they will ensure that citizens get access  to electricity  from schools, health centers, households as well as Small, Medium and Micro Enterprises (SMMEs) enterprises in off grid communities across the country through renewable power sources. In particular, the project focuses on rural areas and communities far away from the national power grid, by embracing solar home systems and mini-grids to meet electricity demand in the country.

LREEAP Project Manager Limpho Kokome explained that, a mini-grid system includes a power generation as well as a distribution system that delivers energy to isolated parts of Lesotho, in this case Ha Nkau will be distributing energy to more than 10 surrounding villages. He guaranteed that the solar energy is more cost effective for Ha Nkau community unlike the usual hydroelectric power.

According to Hydroelectric energy website, unlike solar energy, electricity made from water is more expensive because it demands dams. Although they do not cost much to operate, the time it takes for a dam to benefit the community vary widely since some dams can take five to ten years to construct.

Whereas mini-grid is pollution-free and causes no greenhouse gases after installation. Also, it provides reduced dependence on foreign oil and fossil fuels. Since the electricity will be coming from Solar energy, Kokome also indicated that for better electricity services even on cloudy days the project will have batteries for a backup plan.

Ha Nkau Chief, Chief Sealuma Letlala expressed his gratitude towards LREEAP for selecting his region for development and progress. He promised to take good care of the mini-grid powers house once it is installed, he also guaranteed that he, together with the community members, will join forces to protect the station.

The project began with an infrastructure evaluation process, where the community members had to identify the no-go areas like graves and heritage sides that should be avoided during the installation of electric lines to avoid any violation that may anger the community or hinder progress.

LREEAP is being implemented by the Ministry of Natural Resources through the Department of Energy and the Lesotho Electricity Company (LEC) in collaboration with the World Bank.