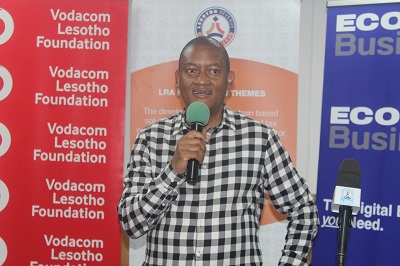 Speaking at the event, LRA Commissioner Operation Support Mosuoe Mapetla highlighted the main objective of the Hackathon which was to improvise innovation capital. He said innovation capital is one of the pillars of LRA, saying the aim is to open opportunities for other stakeholders to contribute in innovative initiatives. He explained that the Hackathon theme is centred on Blockchain technology, Crypto currency and Bitcoin as well as data analytics.

On behalf of the participants and the winners, 1st prize winner from team VATeran Bokang Thola conveyed his gratitude to LRA for sponsoring such a huge and innovative event. He said it was an enjoyable and yet tiring journey as they had to finalize their work in two days’ time, he said they got the chance to learn new technologies and he is thankful for the opportunity.

LRA Commissioner General Thabo Khasipe had earlier announced that the hackathon was a way of finding solutions in collecting revenue. He had mentioned that the government as the first spender on people, is worth the return from this benefits for it to extend the hand to the needy. He added that compliance should be automatic. Khasipe further said that the richer the person becomes, the more tax they pay. He urged the winners to ease the process, saying innovation capital is yet another source of value.

Khasipe thanked the participants who made the event successful and said he hoped it has been an enriching experience. “I would like to send my gratitude to the winners especially VATeran, panels of judges for the job well done, LRA Management for supporting the entire event, and the sponsors; ETL, Vodacom Lesotho Foundation (VCL) and African Tax Administration Forum (ATAF),” Khasipe noted.