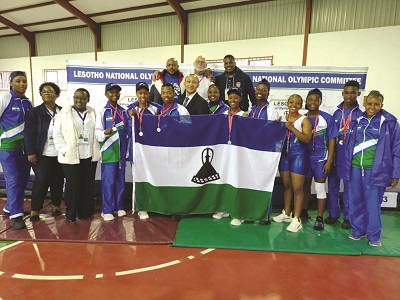 Over participation of 10 AUSC countries, Lesotho obtained position 3 following Botswana with 68 medals: 24 Gold, 21 Silver and 23 Bronze while South Africa (SA) leads with 76 medals: 37 Gold, 27 Silver and 12 Bronze. The other countries which won medals are Angola, Zambia, Zimbabwe, Namibia, Mozambique, ESwatini and Malawi respectively. The number of gold medals won in total were 143, silver 135, Bronze 138 and the overall number of medals is 415.

The Local Organizing Committee (LOC) Team Lesotho Chef De Mission Caswell Moru told Informative Sport that the team did well in the games and it is the first time that they find themselves in this outstanding position. “We encountered problems in terms of preparations; our players were not good but we nailed the overall performance. It was not easy to be where we are today because most players were in the middle of writing their academic external examinations during progression of the games and they did not have adequate time to participate, nor prepare. We managed to take those who were writing internal examinations even though they were hard to find as decisions had to be made for them to take part in the games. For that reason, the writing of examinations hampered the good performance of players,” he explained.

Moru showed that for the players’ safety, they were at the bubble camp where they were not supposed to make extra movements to avoid being in contact with other people as the Covid-19 tests were performed every 72 hours. He added that another huge challenge they faced is that most of the players tested positive and that meant that they will not be able to participate in the games, which also affected the performance of the teams. This situation obligated coaches to make adjustments to replace players who had to be in quarantine.

He further stated that among all sports codes which performed by virtually impaired athletes, taekwondo and volleyball girls were outstanding. “Basketball and swimming sports codes’ performance was behind but we are not blaming them. Senior players’ experience is the one that pulled down the performance but since they gained exposure, that is an advantage for us that next time they will compete,” Moru declared.

He stated that as the organizing committee they show appreciation to the government of Lesotho, sports administrations, coaches, players and the media fraternity for the support and effort that they put to make these games a success under all difficulties they have experienced.

On athletics, Federation of Athletics Lesotho (FAL) Secretary General (SG) Thibinyane Makara ratified that the athletics team Lesotho obtained position 3 among all the countries and it managed to come up with 16 medals – Gold 7, Silver 5 and Bronze 4. “Most of the Gold medals were obtained from the side of virtually impaired persons while mainstream athletes did not perform very well. We participated in all athletics categories except for 110 meters hurdles men, 100 meters hurdles women, 400 meters hurdles women and men and triple jump. Athletes who won medals in athletics class in mainstream are Mphotleng Koeshe while virtually impaired persons are Lebeko Relebohile, Hlompho Kete and Khamoqane Zimesele,” Makara noted.

Makara pointed out that Athletics Team Lesotho encountered a huge challenge of financial constraints before the games commenced which led to the disruptions of their camping plans. However he mentioned that the federation is grateful for the opportunity they were granted to participate in the games.

“Currently we have our own equipment that is going to develop athletics games and assist the players to meet international standards to qualify for other competitions. After these games, we are going to play in various international tournaments including the AUSC Region 5 Games that will be held in Malawi next year, World Athletics Champions in July at Oregon United States of America (USA) and the Commonwealth Games in August Birmingham and Africa Senior Track and Field Events in June Mauritius,” he enlightened.

The LOC Technical Club Chairperson Songezile Dlangamandla said that these games were officiated by local and international referees from the region and highlighted that the local referees were trained before the games commenced and COSAFA also conducted other refereeing courses. He showed that the slight problem that they have is that there are no enough international referees in the country even though there are some who are recognized as both local and international. “We managed to get to the games having all the needed playgrounds for all sports codes and equipment though some of the equipment was borrowed from the neighboring countries like Botswana and SA. To close this existing gap, it is on the shoulders of our sports federations to find assistance from their respective international associations to train people to be in a position of international refereeing,” Dlangamandla informed.